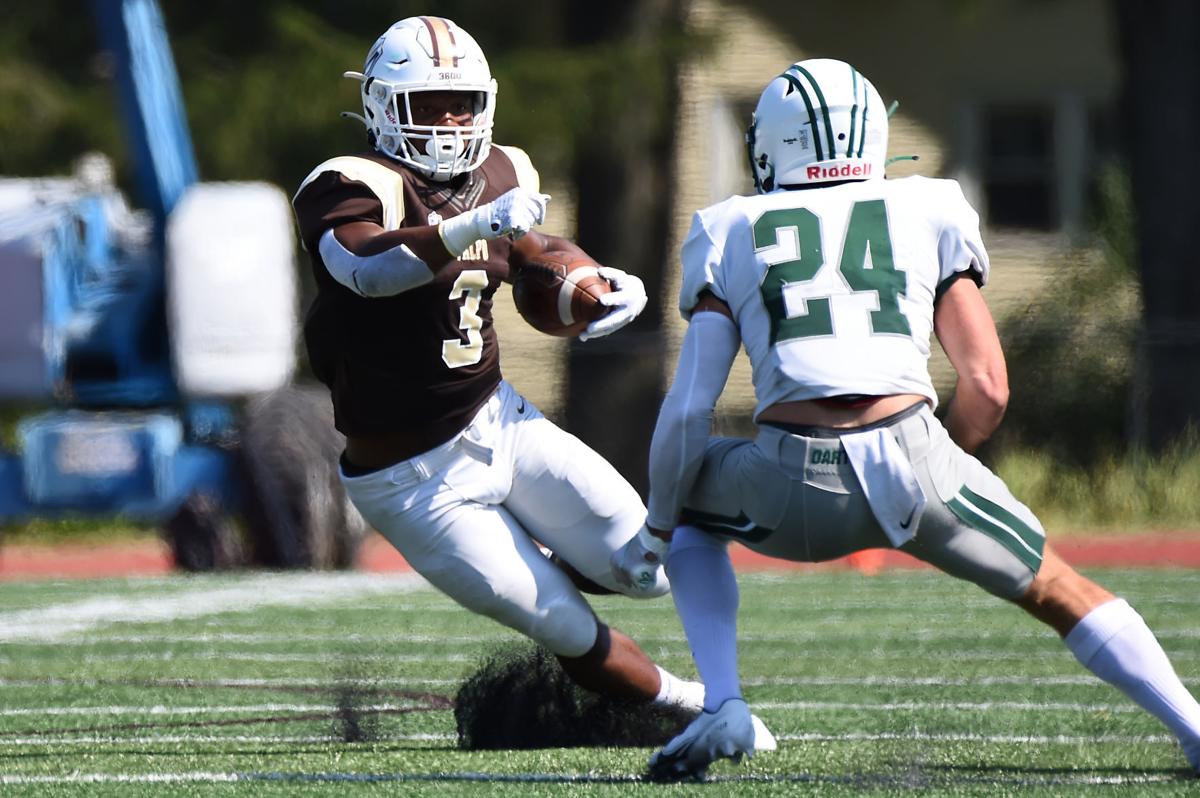 Valparaiso’s Robert Washington looks to avoid Dartmouth’s Niko Mermigas as he runs in the first quarter Saturday at Brown Field. 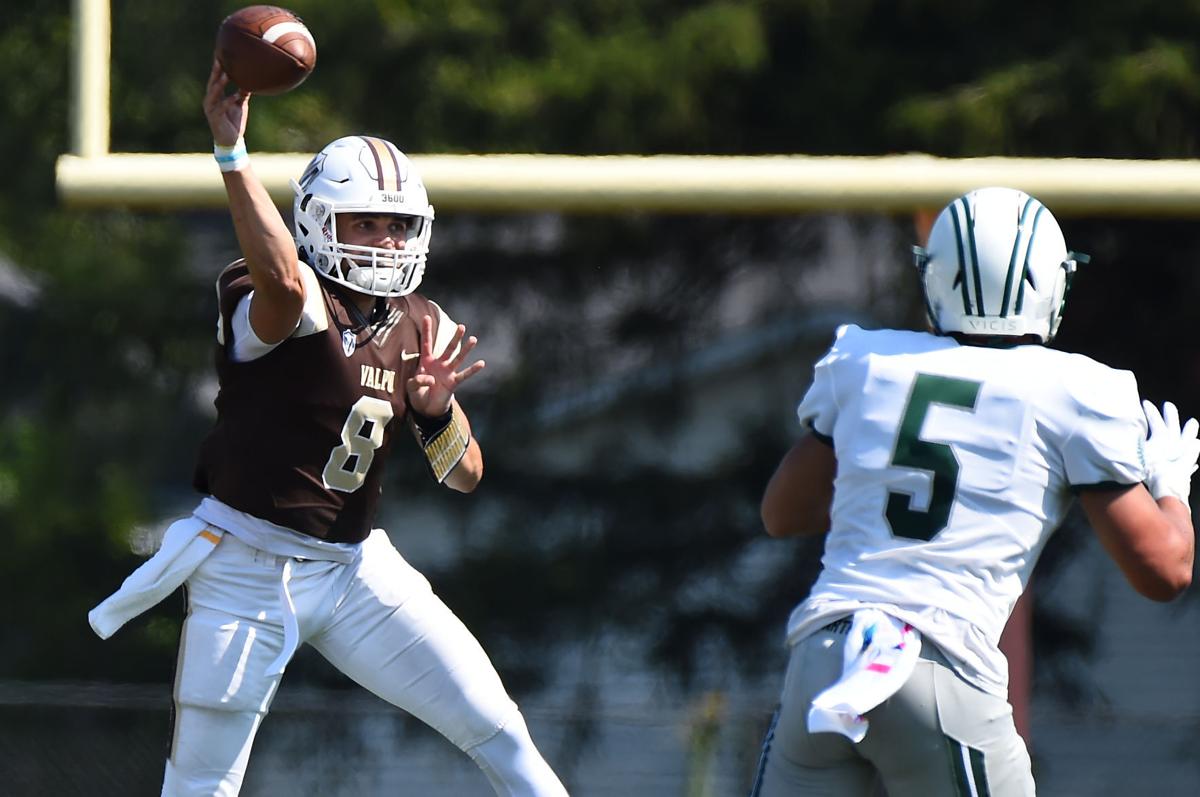 Valparaiso’s Teryn Berry passes for a first down in the first quarter against Dartmouth Saturday at Brown Field.

VALPARAISO — With fans fully back at Brown Field for the first time in nearly two years, Robert Washington and the Valparaiso football team nearly delivered a historic upset.

Entering Saturday’s season opener as 30-point underdogs, the Beacons forced three Dartmouth turnovers and were in position to take the lead in the fourth quarter before a late interception and turnover on downs led to a 28-18 defeat to the Big Green.

Washington, the reigning Pioneer Football League Offensive Player of the Year, topped 100 rushing yards for the first time this season, running for 117 yards and adding another 26 through the air. Washington also threw a successful two-point conversion.

“We definitely have gotten better since Week 1, but we’re not over the hump yet,” Washington said. “The hump where we’ve got to start winning. I know we’re a way better football team than this. It’s something positive to build on that we’re this close and we’re playing this bad. I know we can do better.”

The Beacons lost their 10th straight nonconference game dating back to the start of the 2018 season on Saturday, but the team looked much improved from a pair of losses to start this season. Valparaiso didn’t have the turnover problems it showed in a season-opening loss to Indiana Wesleyan and it moved the ball better than it did in last week’s loss to nationally-ranked North Dakota State.

“We didn’t execute at the level that we needed to,” Valparaiso coach Landon Fox said. “Now, we have become a better football team over the last three weeks, but it’s going to be really disappointing if we continue to say that week in and week out.”

Valparaiso entered the game winless in three previous meetings with schools from the Ivy League, having last played Yale in a 48-2 loss on Sept. 25, 1999. Similar to that game, the Beacons got on the scoreboard with a safety. Valparaiso jumped out to a 5-0 lead, but then surrendered a pair of passing touchdowns from Dartmouth fifth-year senior quarterback Derek Kyler. The Beacons added a late field goal to go into the locker room down 14-8.

The Big Green extended its lead to 21-8 early in the third quarter before the Valparaiso defense took over the game. The Beacons forced fumbles on three straight Dartmouth possessions, turning the miscues into 10 points and cutting the deficit to 21-18. Austin Martins recovered a pair of fumbles and another was snapped out of the end zone for a second safety.

With each defensive stand, the announced crowd of 3,856 got louder and louder. Brown Field was packed with one of the largest non-homecoming crowds in decades and Fox admitted to getting goosebumps when listening to the cheers from the crowd.

“It was by far the best crowd we’ve had in my time here,” Martins said. “The crowd was going crazy with the turnovers and that’s a huge plus for us. I hope that continues for every home game.”

Valparaiso reached midfield with a chance to take the lead before quarterback Teryn Berry threw his fifth interception of the season, allowing Dartmouth to add an insurance touchdown. The Beacons had one last gasp at getting back into the game, but Washington was stopped a yard short on fourth down and the Big Green ran out the ball for the final five minutes of action.

“We have to execute and that starts on Monday,” Washington said. “We have to have great practices every day and we didn’t have one on Thursday. Our defense gave us three turnovers. That’s three touchdowns we have to have.”

Dana Evans' transition from preps to college, and then in the last eight months from college to pros parallel. She was named to the all-rookie team and won the WNBA championship with the Chicago Sky.

Valparaiso’s Robert Washington looks to avoid Dartmouth’s Niko Mermigas as he runs in the first quarter Saturday at Brown Field.

Valparaiso’s Teryn Berry passes for a first down in the first quarter against Dartmouth Saturday at Brown Field.