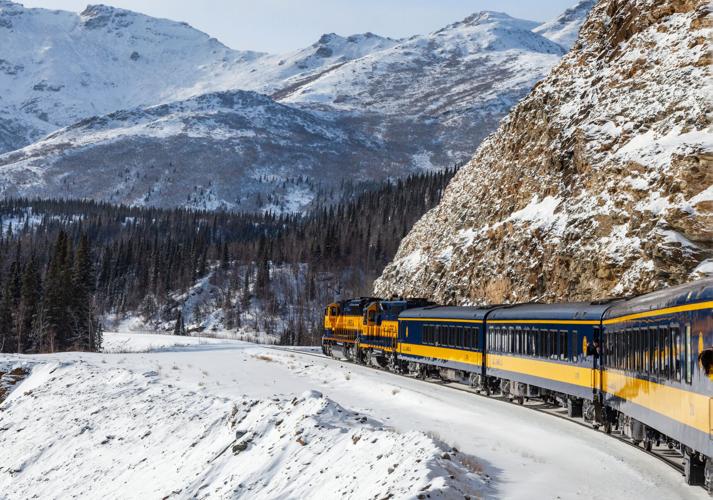 Denali Star passengers lean out between the cars to capture another hairpin turn in the Susitna River Gorge, near Hurricane. (Steve Haggerty/ColorWorld/TNS) 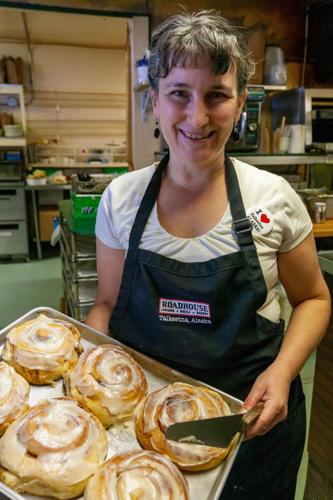 Don't miss an overnight and dinner at the Talkeetna Road House and Bakery, an Alaska legend. (Steve Haggerty/ColorWorld/TNS)

ANCHORAGE, Alaska — When book club member Mary Nelson, responsible for planning the club’s annual fundraiser, told the group she planned to donate a pair of Alaska Railroad tickets to the silent auction, she got a surprise.

“Cruises are more popular, especially Alaska cruises,” said a voice from the back.

“Not this time,” said Nelson, who’d been to Alaska twice. “It’s time to explore the rest of Alaska.”

So climb aboard, look out the window and step into nature’s paint box. Ahead lie thick forests and wind-blown lakes, snow-capped peaks, rushing rivers and neon-green marshes. Look to the west and the Alaska Range appears, swathed in ice, 20,320-foot Denali Peak standing above the rest.

You could rent a car and drive. Some highways do follow the railroad tracks. But the train is a joy, where you sink into comfortable seats to gaze out the windows, watch the clouds float by and let someone else drive.

Adventure Class tickets – popular with families and residents – offer standard comforts: spacious seats, the freedom to walk through the cars, use of the Vista Dome car and a café that sells meals. Gold Star tickets cost more but offer more: dinner and a drink in the private dining car, plush forward-facing seats, outdoor viewing platforms and glass domes. Seniors 65 and older and children ages 2-11 pay half-fare. And some cars have onboard guides.

With COVID-19 suppressing travel plans, good seats, separated by empty rows, are likely to be available. But tickets sell out fast. Mask rules and schedules may change, so check the website now and again.

Your next question is which train and route. The railroad has two main routes, both departing from Anchorage, Alaska’s largest city. If you have a free day, the Coastal Classic, 120 miles long, is an ideal choice. Leaving the station at 6:45 a.m., it heads south across the Kenai Peninsula, stops in Seward and stays long enough for passengers to take a tour or reconnoiter the town before departure, at 6.p.m.

If you have more time, two or three nights or more, the Denali Star train, on a 356-mile route, heads north, stops at Denali National Park and continues on to Fairbanks, gateway to the Arctic.

Why is the Coastal Classic special? The route, winding through the Chugach National Forest, was rated by National Geographic Traveler among the nation’s five most spectacular rail trips. The scenery, visible only from the train, showcases the peninsula’s mountains and the Sargent Ice Field at the summit, 45 miles north to south, of deep, ancient glacial ice. Dividing the peninsula from Prince William Sound, to the east, it’s the source of rivers, streams and lakes.

The trip ends in Seward, the peninsula’s oldest town, settled during the 1896 Alaska gold rush, where you can fish for halibut, visit the Chumash Heritage Museum or tour the Sealife Center, a zoo, museum and marine-life laboratory in one.

But for most travelers, the goal is a three- or six-hour wildlife cruise on Resurrection Bay, in the Kenai Fjords National Park. On an ordinary day you’re likely to see whales, a couple of orcas, otters perhaps, porpoises, a bear, seals and sea lions.

On a good day you’ll see all of them, swimming, puffing mist into the air, leaping out of the water or sunning on the rocks. Bald eagles perch in trees and auklets and puffins nest in rocky cliffs. The weather varies, so bring a warm, windproof coat and motion sickness pills.

Why take the Alaska Railroad’s other major route, the Denali Star? Because it goes to Denali National Park, 6 million acres, all unspoiled wilderness, one of the last of its kind. If you’re even close, you shouldn’t miss it.

Book a room in one of the hotels or lodges near the entrance and sign up for one of the many guided bus tours that explore the park, the Tundra Wilderness Tour, or the Eielson Visitors Center Tour, for instance. The park has only one road, for tour and transit buses only. For more tours, comb through the details first, at Denali National Park.

Depending on the day, the Denali Star makes short stops in Wasilla, near Anchorage, or in Talkeeta. It may even make a whistle stop if the engineer sees someone standing by the tracks waiting to board. It’s a reminder that Alaska’s railroad is part of the state’s public transportation, a vital service for back-country residents who need a doctor or groceries.

After the Denali Star stops at the Denali Park station it heads north to Fairbanks, famous for ice sculptures, the Northern Lights and the University of Alaska. Call early for the Fairbanks “City Highlights” tour, then follow the map to Pioneer Park and to the University for a look at the campus.

Next spend an hour absorbing the first-class collection at the Museum of the North, then head to Fountainhead Antique Auto Museum or the Ice Museum, most likely the only one in the country. If time allows go to Chena Hot Springs where you can rent a snow machine for a slippery slosh through miles of snow drifts, and a long hot soak afterward.

On the train again, returning to Anchorage, take another look at the Alaska state map, the one you brought with you. Southcentral Alaska, what you’ve seen from the dome car and those big square windows, seemed endless.

So many peaks, so many trees, so much ice and so few towns; it’s unreal. Alaska, in fact, is larger than California, Texas and Montana put together, and the Southcentral region, where the trains run, accounts for just 10%. Think of the places awaiting your next trip north.

Are there any other railroads in Alaska? Yes, in Skagway on Alaska’s southeast coast. The White Pass & Yukon Railroad, built in 1898 during the Gold Rush years, is now a tourist attraction, owned by Carnival Cruises, which keeps its narrow-gauge steam engines busy hauling cruise passengers up the mountain.

Peer out as the train follows the historic Klondike Trail uphill, weaving around cliffs and crossing deep gorges, and think of the countless men and horses that struggled and died here, trying to reach the gold fields. The trip, literally a cliff-hanger, is sensational.

But there’s a hitch. You can’t ride the train unless you go to Skagway, and you can’t go to Skagway except by ship. This tiny coastal town is one of Alaska’s land-locked villages, a place with no direct way in or out. Unless, of course, you could take the book club’s advice and book that cruise.

Let it snow: Your best winter travel photos from our Destinations Photo Contest

How to cope with 'empty nest syndrome'

Four plants that will help keep bugs and mosquitoes away

Four plants that will help keep bugs and mosquitoes away

Watch Now: How much is too much salt

Watch Now: How much is too much salt

US airlines most likely to bump passengers

Bumping is standard practice for most carriers. Here's a look at the airlines that do it the most.

Who really needs clean towels and sheets every day on vacation? Ditto for super-long showers.

This Airline Amenity Is Making a Comeback, and It’s Refreshing

For those among us who like a tipple after takeoff, consider this a sign that the world is healing: Many airlines are resuming in-flight meals and alcohol service. Early on…

Of the great cities of Europe, four are worth a week of sightseeing: London, Paris, Rome, and Istanbul. And of those, Istanbul offers the most thrills for the best price. With every visit, I simply get out and stroll.

Should You Fly or Drive This Summer?

With the cost of everything rising faster and faster, it can be hard to build a reliable travel budget. Will gas prices rise or fall by the summer? And will…

Denali Star passengers lean out between the cars to capture another hairpin turn in the Susitna River Gorge, near Hurricane. (Steve Haggerty/ColorWorld/TNS) 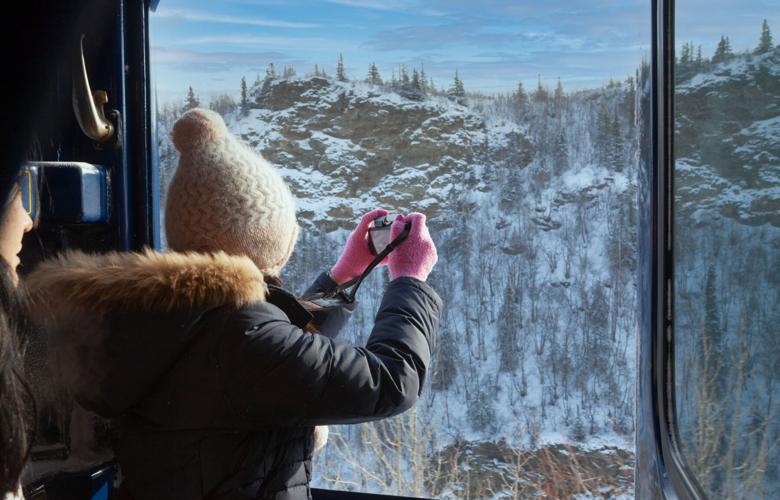 The Denali Star train, winding through the Susitna River gorge near Hurricane, slows down to make each turn. (Steve Haggerty/ColorWorld/TNS)

Don't miss an overnight and dinner at the Talkeetna Road House and Bakery, an Alaska legend. (Steve Haggerty/ColorWorld/TNS) 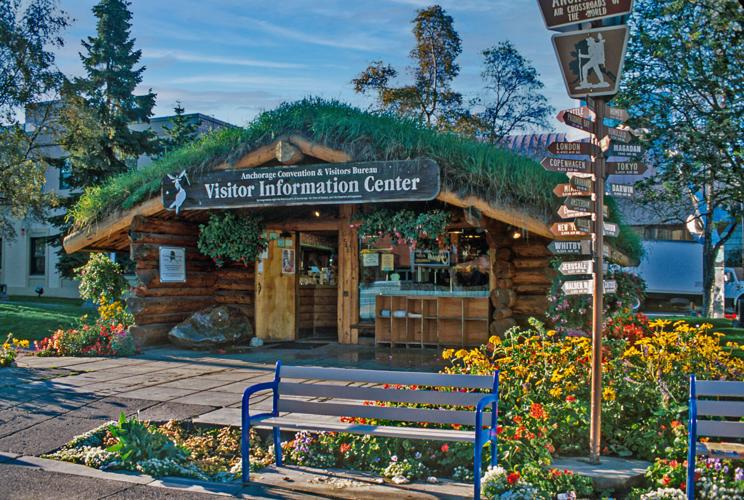 The Visitor Information Center, in central Anchorage, connects travelers with Alaska Railroad schedules, tourist attractions, flight tours, restaurants and hotels in the city and throughout the state. (Steve Haggerty/ColorWorld/TNS) 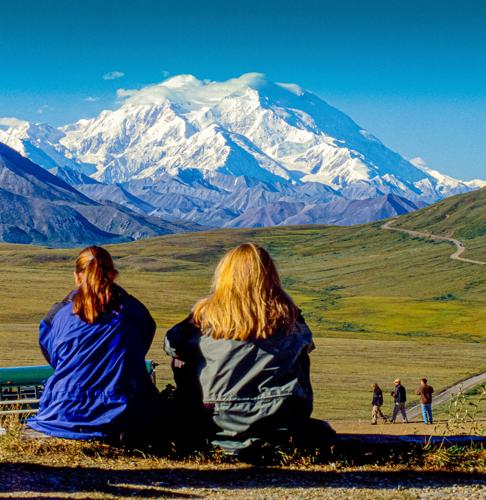 Amazing Denali, also known as Mount McKinley, its former official name, is the highest mountain peak in North America, with a summit elevation of 20,310 feet above sea level. (Steve Haggerty/ColorWorld/TNS)