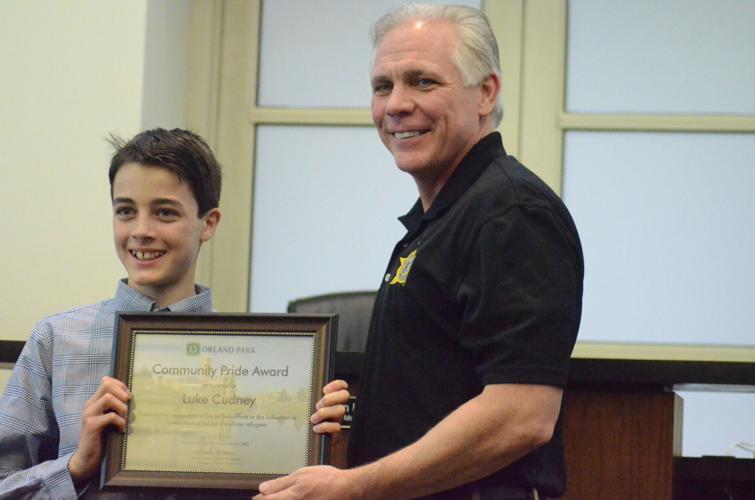 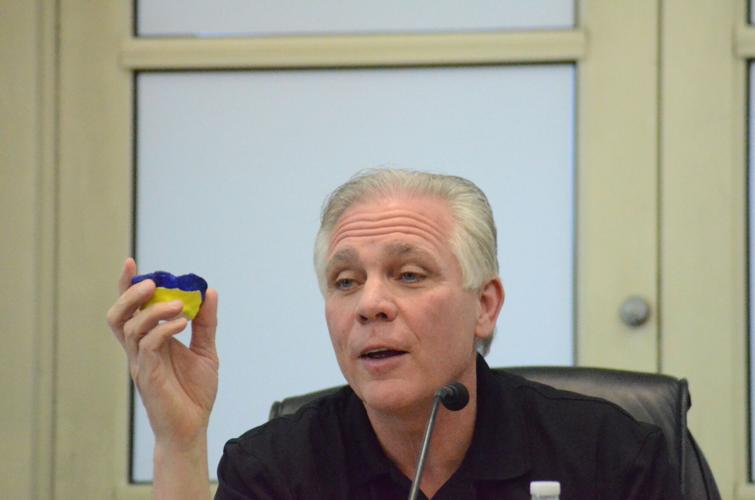 Orland Park Mayor Keith Pekau holds up a piece of pottery that 11-year-old Luke Cudney made and sold to help benefit Ukraine.

Before he even turned 10, Orland Park’s Luke Cudney was doing good deeds.

When he was 8, he and his father, Nick, took a missionary trip to El Salvador.

“We helped out orphans,” he said. “We built beds and helped paint schools.

“I want to help the world.”

With Russia invading Ukraine, there is a need for money and supplies and the Village of Orland Park came through with a truck full in March. Orland Park Mayor Keith Pekau estimated that the village collected roughly supplies to nearly fill a 53-foot trailer..

Also in that collection was more than $500 that Cudney raised selling pottery, money the village used to help with shipping costs.

Pekau and the board of trustees were so impressed with Cudney they presented him with a Community Pride Award at the April 4 board meeting.

“It was a cool idea to make these bowls out of clay and paint them with the Ukrainian flag colors,” the mayor said. “With his brothers’ help, they sold these in the neighborhood and made (more than) $500 that they donated to help the shipping costs to bring all of those goods overseas. The people of Orland Park stepped up, and Luke really stepped up.

Though the Cudney family is not related to Ukrainians, they have several Ukrainian neighbors.

Luke and his younger brothers, Levi, 9, and Graham, 5, made the pottery and sold it for $5 each from a table in the driveway.

Sarah Cudney, the children’s mother, was surprised they raised so much money. She was hoping for maybe $200 but more than doubled that. After the meeting April 4, Sarah Cudney said the family raised $526.

“Some gave $5, and some gave $20,” she said. “Some drove more than 30 minutes to buy some. One neighbor passed by and starting crying because of what we were doing.”

“As the father of an 11-year-old daughter, I have some insight on the sacrifice of time, energy and effort you all put into this,” Sean Kampas said. “Your parents must be very proud.”

“Sometimes small ideas like this can make a huge impact on people’s lives,” Michael Milani added.

Others in the community heeded the call. Though the village supply collection March 19 was hastily put together, it produced close to $12,000 and almost enough supplies to fill a 53-foot trailer stationed at Village Hall.

“We had to scramble to put all of this together,” Trustee Joni Radaszewski added. “I’ve planned a lot of events in my day, and it was very, very well done. Everyone was on-point. I’m sure the 3 million refugees — all of the women and children — definitely value this.

“It can’t be overstated: It was cold and rainy but the amount of love and support for Ukrainian refugees was more than adequate to keep our volunteers warm throughout the day,” Kampas said. “The word ‘awesome’ is overused in our culture but in the truest sense of the denotation, what I witnessed was awesome.”

A Chicago-based artist known for her abstract sculpture is exhibiting her work at South Suburban College in South Holland.

It’s the perfect storm — historic low inventories, rising prices, builders who can’t keep up with demand and a desire to move to one of the communities that make up the Southland.

Providence Catholic High School's long-time athletic trainer is honored by Buddy's Helpers for his dedication and service to students.

A bill that would provide the funds to turn the Lincoln-Way North High School property into an Illinois State Police training facility is working its way through the Illinois General Assembly.

April is a huge month in men’s college volleyball, and the area is chock full of alums on teams that made it to national tournaments.

Cook County is accepting applications for mail-in ballots for the June 28 primary.

Orland Park Mayor Keith Pekau holds up a piece of pottery that 11-year-old Luke Cudney made and sold to help benefit Ukraine.